Or what happens when 13,000 Wikipedia users play the Dictator Game (DG)…

In those days, the « sharing economy », or the « uberization » of the behaviors and of the economy are quite central in the social and political agenda. The idea that the digitalization of the economy allows people to share and collaborate more easily to reach their goal is actually appealing.

When Mancur Olson wrote the logic of collective action (1965) he couldn’t have imagined the size reached by some online public goods.

Among them, Wikipedia is probably the most emblematic, as in 15 years and only on the basis of voluntary contributions, this platform has produced the most important corpus of knowledge ever assembled. Hence, there is now a large body of literature dedicated to understanding the motivations of contributors who foiled Olson’s paradox.

A first step towards explaining this evidence, might be the existence of prosocial preferences among contributors1: altruism, inequality aversion, reciprocity and social norms are alternatively used. People don’t bother that most users do not contribute, because they are altruists, or because they feel they have more knowledge than others and have to share it, or simply because they feel compelled to do this.

To address these questions, and thanks to the French Wikimédia Foundation and the Wikipédia project,  Godefroy Dang Nguyen, Sylvain Dejean, and I designed a large scale experiment to determine whether or not prosocial preferences explain cooperation in a large digital community, Wikipedia.

How did we do that?

Through a click, this gave to the respondents, an access to a questionnaire dealing with habits, contributions and perception of the platform.

We invited the responders to our questionnaire, to participate also (again through the questionnaire), to a simulation exercise of a dictator game.

During this period almost 30,000 Wikipedia users started the survey and 16,879 finished it. Among those who reached the end of the survey, 13,528 played the DG. For the rest of the article and in our analyses, we will consider as respondents only those 13,528 who completed the whole survey and the DG.

“You receive a sum of € 10 you have to share with another person (which, in our case is another person who answered the questionnaire). How do you keep?”
This game is very simple, there is no strategic interaction, so it is easy to implement online and not prone to biases of understanding.

What does the literature say on the responses to this game? Below is the result of Engel’s meta-analysis, which lists 328 treatments and more than 20,000 players. 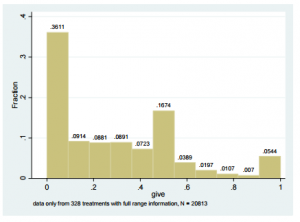 35% of the people gave nothing, and are generally treated as rational and selfish individuals, non-zero responses being treated as prosocial behaviors like altruism or preference for equality.

What did we found (over 13,000 answer to our questionnaire)?

Our results show that respondents have overwhelmingly selected the equal split (fifty/fifty) in the DG (66% of the sample)! 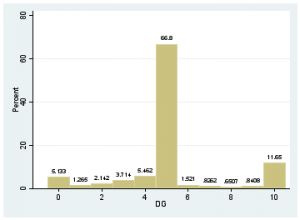 According to the research in experimental economics and psychology, this result suggests the existence of a strong social norm inside the Wikipedia community. So people are much more prosocial than expected, and than in “normal life”.

Is the involvement in Wikipedia responsible for the pervasiveness of this norm? And which kind of involvement; contribution to Wikipedia, usage?

Contributors are not more pro-social.

As reported in the literature review, most papers studied the prosocial attitude of Wikipedia contributors.

But our results show no significant difference between these two populations of contributors and mere users: in both cases the usage and the preference for the platform is associated with an increasing probability of choosing the equal split in the DG.

It seems that even if prosocial motivation may be a necessary condition for the contribution, it is a not a sufficient one: knowledge, time, self-confidence, ability to use a wiki and learning process inside the community (Dejean et Jullien, 2015) are others determinants of the contribution. But in any case, many more people than the only contributors inside the Wikipedia community are driven by similar social motivations.

Involvement in (the usage of or the contribution in) Wikipédia leads to equal split.

The foregoing result leads us to investigate whether the involvement in Wikipedia is the best explanatory variable for the massive choice of the equal split.

The commitment to Wikipedia is associated with the equal giving: the intensity of uses and the declared attachment to the platform, are both associated with an increase in the likelihood of choosing the equal split.

The seniority in Wikipedia is only associated with the equal split when it’s the only independent variable. This means that this variable is strongly colinear with others covariates (as for instance the age of respondents), in particular the other measures of involvement. Indeed, the declared preference for Wikipedia, as well as the propensity to use it in different contexts, is probably increasing with the time spent on the platform.

In the survey, we also asked to the respondents whether they use Wikipedia “for your professional activities”. While personal motive of using Wikipedia is associated with an increase in the propensity to choose the equal split in the DG, this is not the case for professional usages.

People who have an extrinsic motivation to use the encyclopedia (being asked by their boss), are less prosocial, less prone to adopt the focal point of 50/50 split.

What does that mean?

One possible explanation is that the 50/50 choice in the DG manifests a preference for reciprocity amongst Wikipedia users, and this preference has been also highlighted in the work of Algan et al (2013), but only among contributors. Our result calls for considering reciprocity in an extended context gathering both contributors and readers in Wikipedia. The former give time to write and discuss article for readers and the readers give attention and audience to the contributors. This attention is the basis of social benefits exhibited by Zhang et Zhu (2011) in their natural experiment and encourages to consider the importance of non contributors in the dynamic leading to the provision of the public good.

Another explanation may be that the involvement in Wikipedia, either as contributors or as mere but committed users, provides a feeling of belonging to a community, in the spirit of Akerlof and Kramton. This feeling may lead to consider others as “peers”. It may thus be “natural” to share half of a gift with a “peer” when this is possible. This attitude is reinforced because the community being large and people belonging to it being anonymous, there is no way to make distinction among them and to adjust a gift to one of their features. The only in “common” is the common, Wikipedia, and it is that the attachment to Wikipedia, and probably to its valors which makes them worthy to get half of the pie (try to make the Uber users play the same dictator game, we bet that you will not reach the same level of fifty/fifty share!)

This paper exhibits the existence of a strong social norm in a massive online public good, revealed by the choice of the equal split in the dictator game. With the help of the French Wikimédia Foundation, we have invited Wikipedia community to participate (through the questionnaire), to a simulation exercise of a dictator game (DG). This procedure, standard in the experimental economics literature, has been conducted here on a very large scale, since the number of persons who completed the whole questionnaire amounts to more than 13,000. This has provided us with a huge sample, and has given statistically relevant evidence on the way people abide or not by some sorts of social norms. We have also shown that both contributors and non contributors adhere to this norm, and that it is correlated to the “patronage” of Wikipedia, as those who often use the encyclopedia, or have been using it for several years, or declare a strong attachment to it, are more willing to choose the 50/50 split …
Source: Publications document de travail